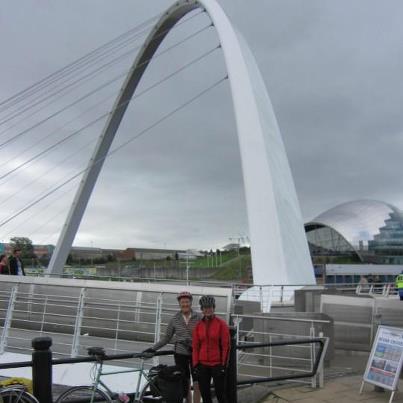 Coast and Castles South is arguable one of the NCN’s easiest, but no less epic, long distance routes. It is called the Coast and Castles because of the hundred or so miles of shoreline it follows. It threads its way through Northumbrian fishing villages passed vast sandy beaches and is dotted with forts and castles such as Tynemouth, Warkworth, Bamburgh and Lindisfarne.

We had a great train journey to Newcastle, cycled passed the Gateshead Millennium Bridge and the Sage Centre towards Tynemouth, where we ate our picnic lunch. On to Whitley Bay, Sleaton Sluice and Blythe. We enjoyed reading information boards giving details of the area’s artistic and industrial heritage. Our map indicated Blythe can be confusing but the cycle path has been re-routed and now goes through a lovely park and through the town with no problems. Onwards we went to Newbiggin, our first stop over. I can certainly recommend the fish & chips here, but we did pass on a deep fried mars bar! After an evening stroll round the town, taking in some of the art trail, we slept well. Lynemouth was pretty, Amble busy with a Sunday market. We stopped here for a delicious artisan ice cream and a seriously good coffee. Sitting in the sun we enjoyed a pub lunch at Alnmouth. Julie was very impressed with Bamburgh, its castle dominating the sky line. We took time to cycle up to the castle to see the marvellous expanse of sandy beach along all of this coast. It was late afternoon, so we pressed on to Belford, our second night’s stay. In the hotel that evening we joined in a quiz night, our team did not win but it was fun. The next morning was lovely sunny and as we neared Lindisfarne, the tide was out. I think this was the high point for both of us, to cycle across the causeway is stunning. On we pedalled towards Berwick, a bit rough at times this bit. Berwick is steeped in blood soaked history, built upon a peninsula at the mouth of the Tweed. This is where there’s a choice, you can go in land to Kelso, Melrose etc. or take Route 76 which keeps to the coast. We had chosen to keep to the coast. The wind had been getting steadily stronger so by now the cycling, although just slightly undulating, was fairly tough. Went passed the “High Tops” wind farm – all turbines going at full speed! After a steep downhill into Pease Bay and a climb out, we were certainly pleased to arrive at our B&B in Cockburnspath. Very quite village and as our host for the evening offered to prepare an evening meal we accepted (booked in advance.) Lovely old house we ate in the conservatory and had our coffee in the lounge looking through a glossy book on the history of the area.

Now, it was our final day. Still very windy, we enjoyed some time in Dunbar and visited the John Muir museum. John Muir was a naturalist, geologist and conservationist. Quick look at the selection of independent shops and off we went to East Linton and Haddington for lunch. From Haddington there is a brilliant traffic free old railway path to Londniddry, then through Pestonpans to Musselburgh. In was in Musselburgh I lost my map. Gosh the wind was so strong we were almost at a standstill, it managed to rip the map out of my map trap and open it up completely, like a table cloth being blown down the high street. That was the last of saw of it. Luckily Julie had a map. We were both a little concerned about getting in Edinburgh but need not have worried, it was really well signed. We cycled through the Innocent Railway Tunnel, a huge tunnel that passes along the edge of Holyrood Park. Formerly used to haul coal uphill by train, it now forms part of the Innocent Cycleway. The tunnel was built 1845 and is 517 metres long.

The festival had just finished but Edinburgh was still very busy however we managed to find our B&B without any problems. After congratulating ourselves on our achievement, we showered and changed and had a delicious meal at The Doric near Waverley station with a good bottle of Melbec. Julie finished with a single malt we then enjoyed an night walk up to the castle and its surrounds. A fairly early breakfast and caught the 8.30 for Kings Cross and home.

A great cycle ride, although as indicated on the route sheet, a little rough in places. Well signed throughout. Distance cycled 190 miles.