Cycling by Numbers – an adventure in Holland

with Angela and Christine 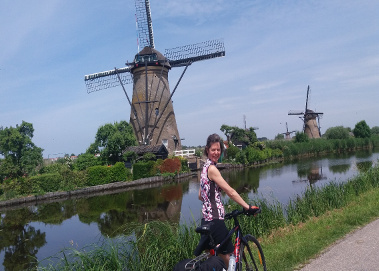 We did a little research. We planned a visit to Kinderdijk, a UNESCO World Heritage site near Rotterdam, which is a unique collection of 19 authentic windmills, and are considered a Dutch icon. Also both having a keen interest in modern architecture, to visit another UNESCO site, the modernist Rietveld Schroder House in Utrecht. After a very smooth crossing on the Stena Hollandica we started our adventure. The signage proved quite efficient and with the benefit of a local giving us more detailed directions we found the Erasmus Bridge for the ferry to Kinderdijk. Had a good look around this world famous site, then enjoyed an ice cream in the sun before heading onwards to Lekkerkerk and a very small ferry to take us back across the river. It was about this time we started “cycling by numbers”. In some regions of Holland they have installed a system of cycle network routes known as ‘Knooppuntroutes’ This is a system of marking each intersection of the network with a unique number. Signs are placed along the route giving you directions to the next numbered intersection of the cycle routes that radiate from the last intersection. Once you get the hang of it, it is quite easy to navigate, you just look at the map, decide your route, note the numbers and then follow the signs. We soon got to Gouda and sat in its lovely square to enjoy a welcome beer. It was a little tricky finding our way out, however we did, to successfully navigate our way to a particularly lovely cycling route at Lange Linschoten. Part of the Dutch Green Heart, as much of our route is, it may well be at its prettiest alongside the Lange Linschoten stream, on both sides lined with (knotted) weeping willows and old, scenic, dairy farms with their thatched roofs. As planned we caught the train at Woerden to Utrecht. The centre of the city is in chaos, particularly around Central Station so had difficulty in finding our accommodation. We were helped by a “Deliveroo” courier who said he would take us there unless he had a delivery call, we got on our way then a few minutes later he received a call and had to go. We got our phones/Garmin out. Garmin said of address and postcode “no results” Christine explored her mapping app…. we followed it for a while, after some time we decided to ask for advice. A lovely chap, said he would take us there, and he did, great rejoicing!

Heike, our host in Utrecht was great, suggesting places to visit and help with using the buses, restaurants to try, and of course providing a delicious breakfast. The accommodation was booked through AirB&B which I had not used before and would certainly recommend it.

I had already booked a cycle tour of the city, this proved disappointing as when we found the bike tour office we were offered Dutch bikes with a back pedal brake. I tried one out on the wet cobbles and felt very hesitant and we both decided against it.

This did not hold us back. We went into the gothic cathedral, climbed the 465 steps up the 112metre high Dom Tower, here our reward was the most spectacular panorama of Utrecht. Had a great time at the market, sampling cheeses, breads, and meats, and freshly fried “fish bits” for lunch, delicious. Decided to catch the bus to visit the Schroder House. This masterpiece by the architect Gerrit Rietveld is a must-see for any visitor to Utrecht. The house is a highlight of the De Stijl artistic movement. Then, back in the main square I had a “contact moment” with some yoga enthusiasts. 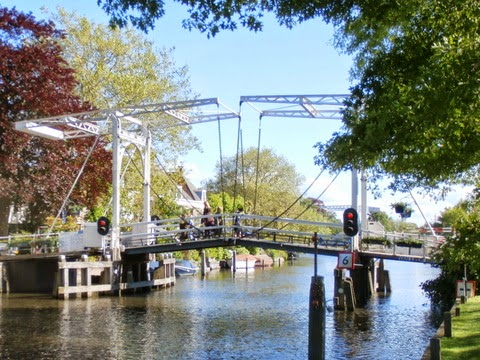 We admired the architecture of the Winkel van Shinkel building. Winkel van Sinkel was the first department store opened in the Netherlands. It opened in 1839 and you could buy almost anything you wanted, now a restaurant/club and finally found the flower market. Had “drinks in the church”. At the time of the reformation a church was made inside a building that appeared to be an ordinary house from the outside. Now called Olivier’s it serves a great selection of beer.

The following morning we departed this buzzy city following LF9 (one of the marked long distance routes) and then our trusty number system, taking us across several polders, havens for wildlife, passing many boats, to enjoy a beer in Vreeland alongside the River Vetch.

There are probably only a few places more tranquil in the world than the sleepy Vecht River. The merchants of the Dutch Golden Age built their country mansions on these Vecht riverbanks, in between the numerous dairy farms and windmills. The country lanes on both sides of the river are a cycling heaven, taking you through a leafy, green, Dutch landscape, with another peaceful view awaiting you every 100 metres or so.

On leaving the river a few rain drops fell, not long after we experienced a bad thunder and lightning storm so took cover under a road bridge. A bit of a mystery here as the bridge we were looking for on our route, turned out to be a ferry. After much discussion we decided to abandon visiting Aalsmeer to concentrate on getting to Leiden, our overnight stop. We caught train from Breukelen to Alpen, then cycled on and into Leiden, birth place of Rembrant. The Garmin proved quite useful this time.

That evening we walked around Leiden, it is a picturesque community located in the tulip- growing district in the Netherlands. Home to the oldest university in the country.

Our accommodation that evening was a B&B in the old part of town, very close to the cathedral. Oh dear the many, many chimes of the clock! Also this old house seemed to creak during the night……may be it was haunted?

After breakfast, and a little sleep deprived, we headed off towards the coast and LF1, the North Sea Cycle Route. A complete change of terrain here. Eventually we saw high ground ahead and cycled through sand dunes into the classy seaside town of Scheveningen . We were heading for Delft and what I had not thought about was cycling through Dan Haag (this bought on an anxiety attack!) However, with a little help from the Garmin, Christine soon picked up the numbers and very confidently lead the way through this great city, passing the parliament buildings, and commercial area towards Delft, birthplace of Vermeer and well known for its world-famous earthenware, Delft Blue.

Enjoyed another beer (are you counting?) took lots of photos. We did have a wicked moment, we each both demolished a cream cake, I think we deserved it!

Our ferry did not depart until late evening so we planned a fairly long leisurely ride to the Hook of Holland, cycled through a lovely small town of Schipluiden and on through a huge area growing vine tomatoes. The Netherlands is one of world’s largest exporters of fresh tomatoes. aught in a heavy downpour again, we spotted a whole area of lights, all looked a bit spooky…… on closer inspection it was a huge glass house growing white roses under light, ready to supply our garden centres. A typical farm will grow produce around 100,000 red rose stems per day!

Weather proofs on we cycled through the rain, finally to see a sign to Harwich, England pier 2. We took the opportunity of enjoying fish and chips on shore before boarding the Stena Britannica and home.

Notes: it was great to experience the Dutch cycle routes, cyclists have priority at junctions and their own set of traffic light. Everyone very friendly and helpful. The school run looks so different with Mum’s on bikes collecting children of various ages. We did three day’s cycling, a total of 170 miles.

There are 18 million bikes in the Netherlands. This means that every Dutchman who is able to cycled has 1.3 bikes.