Dieppe Raid then Angela and Julie Cycle to Paris!

The annual Tour des Trois Vallees in 2014 is a series of touring rides organised by the Cyclo-Club Dieppois based on the roads and lanes of the countryside in and around Dieppe, offering various distances (from 30k to 200k) to suit both families and keen club cyclists. A walk is generally offered for non-cyclists.

This is the second year Julie and I have done the above, also known as the Dieppe Raid. It was very well organised, excellent atmosphere and good fun. In total there were 381 participants - 234 Brits. 3 German , 1 Canadian, the rest French.

Dieppe is a pretty town and seaport in northern France on the English Channel coast, north of Rouen and northwest of Paris. It stands at the mouth of the Arques River in a valley bordered on each side by steep white cliffs. 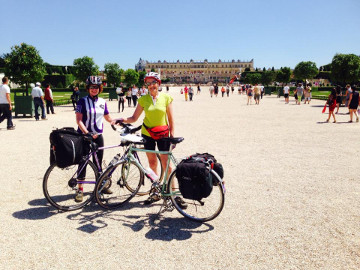 We travelled down to Newhaven by train and spent a very comfortable night at the Premier Inn, our bikes safely in our room.

After a good ferry crossing we arrived in the afternoon and after checking into the hotel enjoyed a Grimbergen in a harbour side bar before meeting some of the other South Bucks riders for dinner. The next day, keen to get going we left headquarters fairly promptly following the signs painted on the road for the 100K ride through quiet villages and through three valleys. The lunch point is the same for all the riders so it is a good opportunity to have a chat with others. We met up with a couple of the Aylesbury riders and later during the afternoon some of the Chiltern Society riders in a bar. Despite a few showers we had managed to keep dry but after lunch we did have to take shelter under some trees. Our return route was along the coast, the sun came out as we enjoyed an ice cream under gloriously blue skies. Back at ride headquarters we watched as presentations were made and thanks given to the organisers. We both agreed the event was thoroughly enjoyable.

Our real adventure began the next day as we had decided to cycle to Paris over three days following a low traffic route from Dieppe to Paris, devised by Donald Hirsch. This took us along paved cycle ways, minor roads, and forest tracks. We were already familiar with the Avenue Verte and this time followed it all the way to Forges-les-Eaux through the rolling Bray countryside in rural Normandy. The highlight of this particular part of the journey was the smiling naked man who went speeding by on his bike! We stopped for coffee in a village on route and lunch at Neufchatel en Bray. After a fairly easy day cycling , we stayed overnight in Gournay en Bray. We were lucky to get something to eat as Gournay was “closed” due it being a Monday and to everyone watching France in the World Cup. 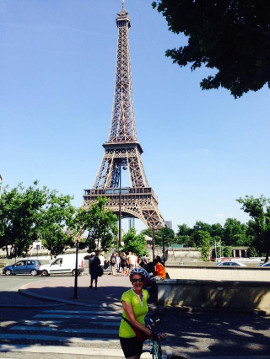 The next day we stopped for picnic provisions in St Germer de Fly, a lovely village with an abbey. After lunch in Marines we cycled onwards over open countryside , through La Coudray, Lalandell, Le Vauroux, La Houssoye to Jouy la Grange, rising to the plateau in the Vexin region. That night we stayed in a lovely farmhouse in Boisemont, “La Ferme Rose”. We both felt a little tired on arrival and settled down to a well earned snooze before our meal taken “en famillie” in the farmhouse kitchen. The next day was our final day cycling to Paris. We awoke to blue skies with the Parisian sky line in the distance. We followed the route along the banks of the Seine for a short distance, through a couple of pretty villages and more urban residential areas taking us to Foret de St Germain and Foret de Marly le Roi on to Versailles where we had lunch and saw the Grand Canal and the Palace of Versailles. It was getting hot and we were a little concerned about joining the route again, however we managed to retrace our steps and all was well. Soon we cycling through Foret de Fausses Reposes, Parc de St Cloud to an aqueduct over the Seine built by Gustave Eiffel. It still helps supply water to Paris, through a pipe underneath where you cycle. Through the busy Bois de Boulogne, continued ahead on Boulevard Delessert, winding down to the Eiffel Tower and smiles all round. We had made it and we have photos to prove it!

The temperature had climbed to around high 20s and it was the rush hour. We made an attempt at finding our hotel. I had got a route planned on my map but with the crazy traffic we hit on a great idea.......we got a TUK TUK, two actually, one for our bikes and one for us. The TUK TUK drivers were great and delivered us safely to our hotel. They even took some photos of us for their brochure!

After a much need shower, change of wardrobe we ambled round the boulevards of Paris, an early evening drink in a pavement cafe, a celebratory meal, a late night stroll in Montmartre, passed the Moulin Rouge and back to our hotel for a well earned sleep.

Our day in Paris was wonderful, I had forgotten what a beautiful city it is. Julie managed to figure out the metro to get us to the Musee d’ Orsay. Recently having undergone a two year renovation, the building, originally a railway station is a masterpiece. We strolled around the post impressionists, looked round the Art Nouveau gallery and then through the masterpieces of the Impressionist movement from 1860 to1900. We rounded our visit off with lunch in their smart restaurant.

Back at the hotel we collected our bikes and cycled to the Gare du Nord for the Eurostar and home.

PS overall the instructions were good just a couple of places we found a bit confusing or we missed a turn due to traffic conditions.