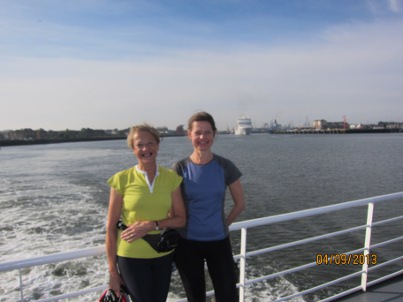 Magnificent coastal views, breathtaking countryside, Roman forts and museums, inspiring modern attractions, quaint villages and attractive market towns, all set in a World Heritage Site: this cycle route has it all! We rode through some of England’s most dramatic and wild countryside where you can really enjoy the freedom of cycling in an unspoilt area. We followed the line of the frontier for 174 miles from Glannaventa Roman Bath House, Ravenglass, northwards along the Cumbrian coast to the Solway Coast Area of Outstanding Natural beauty, before heading east from Bowness on Solway to Carlisle, through the Northumberland National Park and finally along the river Tyne to Arbeia Roman Fort at South Shields.

This adventure started for me with an early morning cycle to Tring station for train to Euston where I was meeting up with, Christine, for onward train to the Ravenglass and to its Roman Bath house, the start of this challenging cycle ride on NCN72. We set off over the sand dunes, past Sellafield through the market town of Egremont, where we enjoyed cup of tea in the afternoon sunshine. Onto Whitehaven, through it’s pretty marina, to Workington and Maryport where we spent our first night at the Ellenbank Hotel. Suitably refreshed the next day, on we went through Allonby, for coffee at Silloth. Looking at our map we thought we would be able to get lunch in one of the three pubs on the next part of route. Oh dear! this was not so, the first did not do food on Sunday, the second, had closed down, the third said we had missed lunch, it being 2.30 (they were not interested in doing a sandwich and we did have a supply of snacks with us.) We struck lucky in Port Carlisle where the Hope & Anchor made us very welcome. The cycle around Solway Coast Area of Outstanding Natural Beauty was extremely windy so by now we felt well and truly battered. We stopped at Burgh-by-Sands, famous as the place where Edward I was brought after his death in 1297. Edward was on his way north to fight the Scots under Robert the Bruce when he died, and the king's body was brought to lie in state in the fortified church of Burgh-by-Sands. Seeing cycle parking outside the church we popped in and saw the display in the tower about the turbulent history of the area. The course of Hadrian's Wall runs right through the village.

Carlisle Hostel was our next overnight stop. Just as we were sorting out our way to the hostel, much to my surprise, we came across another friend on her bike. Eve had started in Newcastle arrived that afternoon in Carlisle and was catching the train the next morning to Glasgow. It’s a small world! The next day was a hilly one. We rested briefly at Lanercost priory, its tranquil setting belies its troubled history. Then to Birdoswald, located in one of the most picturesque settings along the whole of Hadrian’s Wall, overlooking the River Irthing gorge. It is unique because at no other point along the wall can all the components of the Roman Frontier system be found in such a small area. A climb to Haltwhistle and a further climb to the highest point on the route at 867ft, just passed Vindolanda.

At Grindon Hill we spent the night at the Old Repeater Station (an old telephone exchange). Les, the warden made us very welcome and entertained us to tales of a recent pagan wedding in Norway he had attended. We left the hostel in low cloud but this cleared and we visited Chesters Roman fort and the home of the Clayton Collection of Roman stonework and objects before buying lunch in Corbridge. A lovely town with a bike shop, deli, artisan bakery, greengrocers, hand crafted jewellery and gift shops, and yes, of course, a turbulent history. Later we sat and had our al fresco lunch in the sunshine near Prudhoe, afterwards feasting of blackberries, abundant in the hedgerow. We cycled passed George Stephenson’s birth place. We would have loved a cup of tea but it was closed! Through Tyne Riverside Country Park for refreshments at pub in Newburn. Soon we were welcomed into Newcastle, and what a large complex city it is. We managed to find the NCN14 which took us onto the south bank of the river for South Shields, our objective, only to make a mistake shortly after......we asked an oncoming cyclist and he said “follow me, ladies” so we did. We had a couple more problems with the route but my travelling companion, Christine, used her powers of deduction and we found our way, excellent. That still left us to cycle through Gateshead, Hebburn and Jarrow. In Jarrow, we left the signed route and took the main road, finally getting to our B&B at 6.45, later than planned. That evening we had a walk around South Shields, and enjoyed a celebratory meal with a bottle of wine in a nice Italian restaurant, we felt we deserved it! The next morning after our last breakfast en route, we cycled off see the Arbeia Roman Fort in South Shields, it being fairly early in the morning, it was closed. Never mind we took required photos and after discussion at another junction where signage was not clear found the ferry to take us to North Shields and into Newcastle for our train home. A glorious sunny day we cycled on into the city along the quayside to The Cycle Hub/All About the Bike. Here I had arranged for them to store and bikes and panniers so we could walk along the quayside to visit the various sites of interest without worrying about our bikes and panniers. We had both been to Newcastle several times but were always in a rush to get to the station so this time we had allowed a little leisure time to explore. We love the Gateshead Millennium Bridge. We went to Baltic Centre for Contemporary Art, and saw great views of the city from an outside and inside viewing gallery. Visited The Sage Centre, designed by Foster & Partners, very impressive, and St Mary’s Church, now a heritage centre. We went to the cathedral, returned to the quayside to enjoy our picnic lunch, relaxed in deckchairs under palm trees on the “beach”, and tried out the fitness machines, before strolling back to The Cycle Hub for our bikes and finally a cycle ride up a steep hill to Newcastle station for the train home.

Comments on the route.
Choice of accommodation in Maryport, very limited.
Overall it was well signed, except for a couple of places mentioned. We should have allowed more time for NCN 14 to from Newcastle to South Shields.
Surface on the traffic free paths, generally good, although loose gravel and steps on riverside coming into Carlisle. Hadrian’s Wall is a Fairtrade zone.

Hadrian’s Wall is a Fairtrade zone.