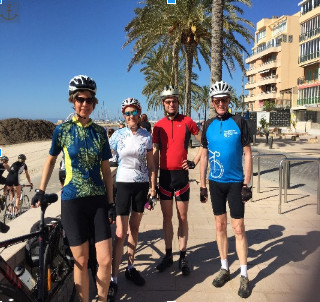 Christine, Angela, Peter and Richard, four regular cyclists with the West Herts CTC, decided to go cycle touring in Majorca. We packed our bikes in boxes of various types to arrive under blue skies and warm sunshine in Ca’n Pastilla, near Palma. That evening was spent sampling tapas and local wine at a small restaurant, followed by an evening stroll for coffee.

The next morning, keen to get going, we set off along the cycle path out of Ca’n Pastilla. Then a stretch along a busy road to reach open country, passing one of the windmills typical of the Balearic landscape.

After good lunch stop at a bar/restaurant popular with cyclists, we cycled past a patchwork of fields dotted with almond, fig and olive trees. Then after a brief visit to Parc Naturel de Mondrago at the coast, we reached Cala d’Or and the pretty Hotel Mistral. That evening we had dinner at a local restaurant, this particular one was recommended by the hotel and at the end of the holiday, we all agreed, it was the best. We finished our meal with complimentary limoncello, delicious. Other evenings we tried the local herb liqueur, Hierbas.

The route from Cala d’Dor followed quiet lanes through farmland and vineyards, passing fields of wild flowers. After cycling through Felanitx, we lunched in Petra before reaching the busy undulating coast road that took us to Can Picafort, where we stayed for two nights.

After we checked in to our small modern studio type room in the attractive ES Baulo Petit Hotel. I ventured into the hotel pool while Christine had a dip in the sea. That evening we arranged to meet Peter and Richard in the restaurant for dinner. Christine and I were waiting at our table when I thought I saw Peter coming along the corridor outside, we thought it best to wave as it was a fairly large restaurant, this we did and when in full flow we realised it wasn’t Peter! This was our “should have gone to Spec Savers moment!”

The next day was our “tourist” day and I think it was my favourite. Peter had been to Majorca several times and proved an excellent guide. We cycled along a road very busy with cyclists to get to the Parc Natural de S’Albufera de Mallorca, a great place for bird watching and other wildlife. After coffee and cycling past more vineyards, we lunched in Pollenca, at the foot of the “Steps of the Way of the Cross”. Christine climbed the 365 steps whilst we enjoyed a relaxing beer and lunch in the main square. We paid a quick visit to Port de Pollenca, a pleasant bay with attractive sandy beach, then to Alcudia, a delightful town surrounded 14thC walls. Entering through the Porta de Moll gate we quickly found ourselves in the main square to enjoy freshly squeezed orange juice. On leaving we caught a quick glimpse of the remains of a Roman theatre.

As many of you know, Peter has done a couple of charity rides. One for the Alzheimer’s Society and another ride raising money for Parkinson’s Disease and when wearing his Parkinson’s top he was approached by Otto, a Dutchman, who suffers from the disease, Otto was interested to know about Peter’s ride. Also in one of our hotels a Swedish doctor who worked with Alzheimer’s sufferers spoke to Peter. Up until now the terrain had been fairly flat but as we had planned a circular tour the day came when we would start climbing, this day was to take us up to Lluc and an overnight stay in the monastery, the spiritual centre of Majorca. After a long steady climb with some amazing views I was pleased to get there. We had a quick look round the Botanic Garden, a visit to the Basilica and walk round the grounds with a great view of the Serra de Tramuntana mountains, then time for dinner in the restaurant very busy with hikers walking the GR221. Lluc has been the destination of pilgrimages for hundreds of years. After a good night’s sleep we were ready for the next day’s rollercoaster ride to Valldemossa, cycling through two tunnels then negotiating hairpin bends on the exciting descent to Soller. A relaxing lunch under the shade of a fig tree then more climbs up to and through Deia, the lovely small mountain town, mostly associated with the English novelist and poet Robert Graves. More climbing to get to beautiful Valldemossa, now and again the view opened up to the sea. In Valldemossa we stayed in small pretty apartment. Nearby is a modest house where a saintly nun, Catalina Thomas, was born to peasant family. The house has now been converted into a richly decorated chapel, open for all to see as you pass. A lovely evening spent looking around the garden where Chopin is commemorated and having dinner in a square opposite a church. The following morning the men found a local bakery and bought back a variety of delicious fresh pastries for breakfast.

We cycled from Valldemossa via Puigpunyent ,a small village set in the midst of orange and lemon groves, to Calvia in the foothills of Serra de Tramuntana mountains, where we stopped for lunch I had a “stuck on the bike” moment. I was tired and had fairly large panniers (quite high and fairly wide) therefore trouble getting my leg over!! (note to self: need to practice!) More climbing after lunch and then a spectacular descent with very tight hairpin bends into Palma where we picked up the cycle path to Ca’n Pastilla, to enjoy a well deserved ice cream in the late afternoon sun. Time to pack the bikes, a final meal with local wine, a stroll for a coffee accompanied by a small measure of Hierbas and then home. We all agreed it was a great holiday.

Notes: Road surfaces are generally good. Where roads climb into the mountains, they rise with steady gradient. Scenery and down hills are rewarding.