CTC Cycle Tour of New England in the Fall

Where we stayed overnight:

New England is a mostly rural part of America, a mixture of tilled fields, pasture, forests, lakes and mountains, dotted with small towns and villages. The area is well known for its white wooden buildings, its covered bridges and quaint fishing harbours on the eastern seaboard, but above all for its vivid autumn colours. While each of New England states offers something, none can top Vermount. With its rich mix of deciduous trees, the Green Mountain State is anything but green in late September/October. The rich palette created by the foliage is made even more dramatic by a backdrop of a deep blue fall sky.

After a short stay in Salem, the route followed the coastline eastwards in Massachusetts to the Cape Ann Peninsula then turned north, continuing near or along the coast into south eastern New Hampshire before heading inland to the expansive Lake Winnepesaukee. After a further day riding north we turned west over the Kancamagus Highway, known for its extensive views and continued into Vermount. Then we turned south east of the Green Mountains before crossing briefly to Massachusetts, then a final foray into southern New Hampshire before the tour finished on the outskirts of Boston.

My notes of the trip.

We flew into Boston for coach transfer with bikes to Salem, Massachusetts for two nights which gave us the chance of assembling our bikes and to deal with any problems at the bike shop.

Our first day’s cycling took us from Salem along the coast to Gloucester passing Hammond Castle, walking out to the Eastern Point Lighthouse near Rockport, a very busy fishing village on the Cape Ann Peninsula. The next day we passed through the busy town of Essex, through historic Ipswich on to Newbury Beach and lovely Plum Island for overnight stay at Hampton Falls Inn. In the morning we cycled along Hampton Beach, one of the busiest during the season. Our lunch stop was in Portsmouth, a very hot sunny day, before we crossed into over the Pistaqua River into Maine. Within 10 miles or so we crossed the Shannon Falls River back into New Hampshire.

One of my favourite stops was The White Buffalo Trading Post, a very old wooden building that sold everything. It had a cafe at the back and a Gun Shop. We popped upstairs and inspected the guns/ammunition....we did spot a neat little number ideal for a handbag! A lovely stop in Wolfeboro that night at the Lake Motel, a couple of us hired boats for a quick paddle on the lake, before the evening meal.

The next day, still enjoying lovely weather, we cycled into North Conway and over the first of new England’s famous covered bridges. Before leaving North Conway the next morning we bought a picnic. Shops and cafes were in short supply as we climbed up and over the Kancamagus Highway in the White Mountain National Forest, New Hampshire. On the way up there were many viewing areas. The climb started fairly gently but I thought it tough at the end. Our reward was amazing views. It is considered one of the most scenic drives in America. A further reward was the 14 mile descent, absolutely glorious, except one of our number, Susan, lost her spindle/quick release mechanism. After much searching we found it but the nut was damaged......what to do? Experienced cyclist, Michael, had an idea he has used in the past. He took her front wheel out and held it up to the traffic to indicate we had a problem. It worked like magic, the first four wheel drive vehicle topped and offered assistance. They took Susan and her bike down into Lincoln to a bike shop for repair.

A much deserved day off was enjoyed by all in Lincoln, some went for a scenic walk, a train ride, or chilled out on a sun lounger. I decided to pamper myself with a full body massage at a Spa Hotel at Loon Mountain Resort. I loved it.

A fabulous ride out from Lincoln along the Lost River Road through Lost River Gorge, with a climb up to Beaver Pond. On the way down we called in at a local “Fall Fest” an opportunity to pick your own apples, buy pumpkins, not a good idea on a bike, but the most delicious apple pie and ice cream was on offer and we sat in the sunshine to enjoy it. Continuing down to the valley we crossed the Connecticut River into Vermont overnight stay in Barre. 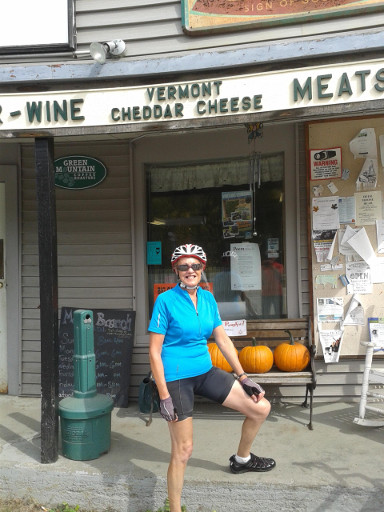 The following day we were faced with a choice of routes, a longer back road route, or a slightly shorter main road. Most of us chose the back road route to White River Junction, little roads, some unsurfaced, and awash with stunning autumn colours. Here, after a couple of hard climbs we had an amazing view of rolling hills with low cloud down in the valley. Later in the day we stopped in South Royalton, the home of Vermount University’s Law School. The cafe/shop was called “Barristers”. I did buy a scarf here and had trouble choosing one out of so many lovely local designs.

The weather now had turned slightly cloudy now but we still had amazing views of the stunning Quechee Gorge, Vermont’s Grand Canyon, had changed its verdant green cloak to one of many glorious colours. Later in the day one of our cyclists discovered his tyre was badly worn so we stopped at the bike shop in affluent Woodstock, I did spot a nice dress shop.......perhaps another time! Yet another long climb out of South Woodstock but a great downhill to Downers Cafe then onwards through the beautiful Black River Valley to Ludlow, a winter sports resort.

The next day was our rainy day. It was overcast as we left Ludlow so heading towards Andover our weather proofs were on. After the initial hills the terrain flattened at Chester. We stopped at the “Moon Dog” cafe, an unusual cafe with lots of local paintings, handicrafts on display and books to ponder over. I very rarely eat at coffee stops, especially on this holiday after an all American breakfast. However, for comfort on a wet day I downed a hot chocolate and a cinnamon and raisin bun (a very large one) which got me up yet more hills. We then came upon Grafton, an architectural treasure trove of 19thC buildings, also the home of Grafton Quilts and Grafton Village Cheese Company. Onwards over another unsurfaced road through woods. Our next stop, was the “Newfane Creamery and Cafe” here I had the best ever BLT panini. We continued on into Brattleboro where we managed to dry our things overnight. 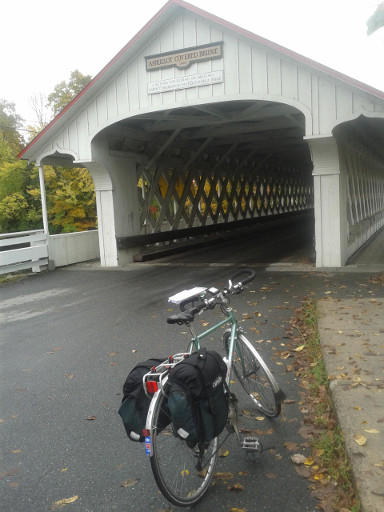 Leaving Brattleboro we crossed the bridge over the Connecticut River again to Ashuelot’s covered bridge. We dallied a while here at a second hand emporium, old radios, gramophones, irons, food processors etc. The sun shone now as was we continued to the small village of Fitzwilliam where we had a picnic on the green. We then headed for the Templeton Turnpike, more miles of unsurfaced road through woods. Here the punctures started. Tom had a puncture earlier in the day. Now Jack had one, followed closely by Susan. I was very lucky not to get one. It was slow going and the directions were not very clear, but a man with dog ensured us we were going the right way, always good to know. We were making for Winchendon then an overnight stop at Gardner.

Our last day’s cycling. We gathered for a photo outside the motel in the sunshine and followed our route. Unfortunately details were not very clear due to a missing sign, so we missed a turning but decided to carry on and just get to Princeton our own way. It worked out well and we continued through Sterling and Clinton for lunch, a very generous one. As we were approaching Concord, one time home of Ralph Waldo Emerson, popular essayist, we asked about a coffee/tea shop and were recommended a small place just near a petrol station. It was a prize winning bakery/cafe and was outstanding. I just wished I was hungry! The traffic was heavy through West Concord and we had to go across a very busy Interstate controlled by traffic lights. On the whole, cycling along the country roads traffic had been very light and we were all impressed with the motorists who almost always gave us priority. The tarmac surfaces varied greatly, occasionally it was a smooth but more often than not the surface was very bad indeed, no time to relax, you needed to be alert. I did have a slight mishap. I cut my leg slightly on some barbed wire so my much travelled first aid kit came in very useful.

Following our route instructions we eventually found the cycle path which took us into Lexington and our motel. Concern was expressed that we had rooms on the first floor, no lift, so had to get bikes up flights of stairs. This proved difficult for the tandem and it was not the first time!

On arrival here, all cycling had finished so many congratulations were expressed all round and we had a great evening at a Mexican restaurant near the motel, I drank my first ever Margarita, delicious, and then another!

Saturday was a free day so several of us decided to go into Boston for a harbour cruise and bus tour around its well known historic sites. I went into the Faneuill Hall, where revolutionary meetings had packed the hall as early as 1763. Spent some time in Quincy Market and walked around the Beacon Hill area.

We were a little worried about getting our bike boxes promptly so we could prepare and pack bikes for our return flight. For various reasons delivery was delayed but we did eventually get them on the Sunday morning of our departure. After I had packed my bike (in cardboard bike box from local cycled shop) I was able to walk into historic Lexington , the Birthplace of American Liberty to have a good look around and a picnic on Battle Green in the sunshine.