The Way of the Roses – August 2011 Cycled by Christine and Angela, West Herts CTC 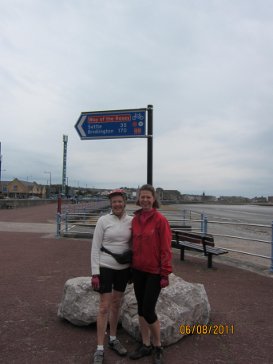 Recently I enjoyed an early morning cycle ride to Tring station for train to Euston, where meeting, Christine, we caught a train to Lancaster to cycle The Way of the Roses Cycle route from Morcombe to Bridlington . The 170 mile route crosses the northern part of red rose country of Lancashire and the broad breadth of the white rose country of Yorkshire. It offers coast to coast cycling adventure through wonderful countryside and heritage of the beautiful Lune Valley, Forest of Bowland, Yorkshire Dales, Nidderdale AONB, Vale of York and the Yorkshire Wolds, all on cycle paths, country lanes and quieter roads.

The train arrived on time in Lancaster and we quickly cycled to Morcombe for a picnic lunch and coffee at the Jetty Cafe. Leaving Morcombe, we followed the route beside the River Lune through Lancaster , over it at Hornby, through to Wray following a very quiet road to Clapham, Little Stainforth and down into Settle. It had been a wet day so we were pleased to get to our b&b to dry our things, particularly our shoes. We enjoyed our evening in Settle and the next morning departed for Ripon. The climb out of Settle is the toughest on the whole route. Although we had not gone far we spotted the Town End Farm tea rooms, too good to miss, and before long we were chatting to lots of lean local cyclists on lightweight bikes, sure enough they quickly caught up with us on our way to the River Wharf at Burnsall and pretty Appletreewick. More climbing took us to Greenhow, an old lead mining village, the highest point of the route (402m/1312”]. We stopped here to take in the views and read the information board, before a very steep scary descent into Patley Bridge. We had a choice of lots of tea shops and walked around a pretty park. The climb out took us to Brimham Rocks,(NT) an amazing collection of weird and wonderful rock formations, wonderful views and dropping down in the sunshine to Fountains Abbey. It was late afternoon and closed so we cycled on into Ripon. Ripon still has an old fashioned charm, with steep winding streets and family run shops. We walked into town that evening, lots of restaurants, an attractive market square. Enjoyed a bottle wine and much to our surprise found ourselves confused as to where our b&b was, things look different in the dark – luckily there was a Co-oP nearby and they pointed us in the right direction, so we did sleep in a comfortable bed after all! Before leaving Ripon the following morning we stopped to take photos of Ripon Spa Baths, opened in 1904, the beautiful municipal gardens and visited the Abbey. A really lovely town, I would like to go back. Officially, it is a city, “Cathedral City of the Yorkshire Dales”.

The day’s cycling would take us to Pocklington. We cycled over flat terrain through villages on the River Ure, over the Ouse at Aldwark Bridge, lunch at Beningborough Hall before picking up an absolutely amazing traffic free route right into the heart of York for an icecream. Outward route good too. However all this was to change, big time. The skies were getting darker and it was very clear we were cycling into the bad weather. As luck would have it we were going across open fields when the heavens opened, we got soaked, we did find a little shelter further on under a carport. We phoned our b&b to say we were delayed, and ventured out. Again and again great pulses of rain poured down. It became a proper flood in Stanford Bridge (battle 1066) The pub we thought about taking shelter in had sandbags at the door, people were walking on tops of walls, water was gushing out of the drains. Truly we had never experienced anything like it. We wondered about phoning for a mini bus.....however an hour or so of sheltering in a burger bar, it was a little clearer so we opted to get to our b&b along a main road. They had put the heating on which was very welcome and we got a taxi into the town to eat. Some local people told us the floods in Stanford Bridge were on the early evening news. Had an early breakfast on our last day, for prompt departure as we needed to catch the train home from Bridlington mid afternoon. Made excellent time to Driffield, over easy terrain, to enjoy a welcome cup of coffee. Lastly, the run under sunny skies into Bridlington, through the old town down to the promenade for that all important photograph and delicious fish and chips on the front, watching the children’s donkey rides on the sandy beach. Great end to a great cycle ride.

This left us with plenty of time to get to the station. Built of red bricks dating from around 1912 is impressive and its floral displays make it one of the most attractive train stations in North Yorkshire. Train connections all worked and I cycled home from Tring in the evening sunshine.

For further information go to: www.wayoftheroses.info
Or telephone Sustrans on 0845 113 00 65

Note: each of our B&B said they were receiving many more bookings from cyclists since this route opened. Some areas were hoping to publicise more local routes so cyclists stayed extra nights.

Category of ride: Challenge
Signage and map excellent. Impressed at the various ways of getting cyclists across main roads in safety.