Christine and Angela’s Adventure in Provence

Our travel arrangements with Eurostar and TGV worked very well and we enjoyed a comfortable night in Orange. After a delicious breakfast we were pleased to meet up with friends of Christine who arrived that morning by the bike bus. After initial chatter we were soon off on a route planned by Jonathan to Aurel. We stopped for a fairly late lunch before a very long uphill taking us to Sault and finally to Aurel.

The hotel was very good, excellent accommodation, food, and friendly helpful staff. After unpacking and sorting out our things we were all ready for our first ride the next morning. Under blue skies and passing fields of lavender we cycled to Ferrassieres, down to Montbrun, alongside a river to Aulan for possible lunch in Sederon. Out of luck here, a Monday and nothing open, however we did find a restaurant on the outskirts that turned out to be great. After a couple of cols: Col de Macuegne and Col de Mort we retraced to Aurel to enjoy what was to be one of the highlights of the holiday, wonderful evening meals served outside on the terrace washed down with local wine. Other rides took us to Banon, Simiane-la-Rotonde, St Christol and St Saturnin les Apt and many other pretty local villages. The weather was good, however, a couple of afternoons it threatened to rain and one afternoon we rode back in a thunderstorm and got soaked!

As we were in the vicinity of Mount Ventoux, a dominant feature of Provence, much discussion took place whether to cycle up it. Decision made, the next morning we ordered an early breakfast and left Aurel heading for Ventoux. The road from Aurel to Sault which we used frequently and where we turned off for Mount Ventoux is stunning, overlooking a valley of lavender fields and lush pasture.

As the name might suggest (venteux means windy in French), it can get windy at the summit, 1909m, and it did ! Wind speeds as high as 320 km/h (200 mph) have been recorded. The wind blows at 90+ km/h (56+ mph) 240 days a year. The road over the mountain was closed that day due to high winds. When we got to the "col de tempêtes" ("storm pass") Christine has a “bad hair day” moment and was nearly blown off her feet! 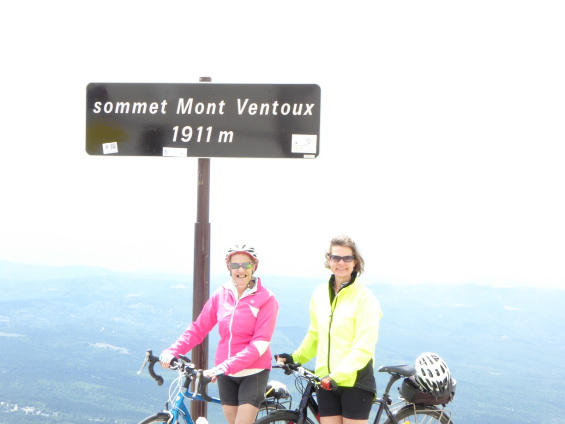 The climb had started fairly leisurely increased gradually. We all felt we had done well to get to Chalet Reynard and rewarded ourselves with a selection of delicious crepes and coffee to fortify us for the attack on the summit. Jonathan, a very experienced cyclist had been blown off his bike a little earlier and decided not to go on. We thought we would have a go and see how it went....gosh it was windy, we decided, as others had ,to get off and walk, then cycle when we could....finally we made it to the top, what a struggle. The summit is crowned with scientific artefacts: a weather observatory, a radar station and television masts! After the required photos we attempted to come down, again walking or cycling when we could. The decent soon evens out and sheltered by trees we had a fantastic ride, downhill for about 12-14 miles, back to Sault to enjoy a lavender ice cream in the afternoon sunshine. The whole day had been an amazing experience, one to remember.

Christine and I departed the next day, Saturday, to cycle to our overnight stay in Orange for our onward journey home by train. Our route took us through the majestic Gorges de la Nesque which cuts through the mountains between Mont Ventoux to the north and the Plateau de Vaucluse to the south. The small D242 road that follows the gorges has one end at Villes-sur-Auzon to the west and next to Sault to the east

We thought we would get to Orange early afternoon but again were held up by a vicious wind. We just could not keep on our bikes, in fact we were both nearly blown into the centre of the road at one point so we walked and cycled when possible. Even walking, our bikes were nearly wrested from our grasp. Wind battered we finally got to Orange late in the afternoon.

Refreshed, we spent the evening exploring this ancient city with its classical theatre and Triumphal Arch before having dinner in the main square. Our journey via TGV and Eurostar worked out well and it was not long before we were collecting our bikes at St. Pancras, our adventure over!